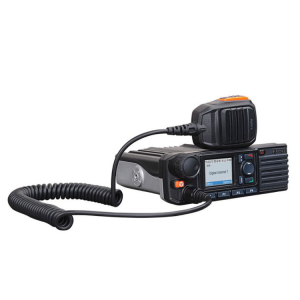 The MD785 and MD785G DMR mobile radios offer versatile digital functions that allow you to exchange information in all types of situations. With their ergonomic design easy-to-operate user interface and remarkable quality, they are the ideal solution for your communication requirements; regardless of whether you are aiming to optimize the efficiency of your company or be able to respond to emergency situations at all times.

Thanks to the simultaneous application of narrow band codecs and digital error correction, the MD785/MD785G offers you outstanding audio quality in loud environments and in boundary regions of the radio coverage.

The MD785/MD785G features an analog as well as a digital mode and is compatible with the currently used analog systems, thereby simplifying your transition into the digital age.

Improved utilization of the frequency spectrum

Thanks to the TDMA process, the MD785/MD785G enables you to assign the available bandwidth with double number of channels. This has a clear mitigating effect on increasing spectrum scarcity.

The MD785/MD785G complies with the standards MIL-STD-810 C/D/E/F/G and meets the IP54 degree of protection. A high degree of reliability is assured even in harsh environments.

Thanks to the expansion interface, the range of functions offered by the MD785/MD785G can be expanded by significant key functions. Accessories and applications developed by partners can be connected to this interface.

The high-resolution LCD screen offers a clear display, even under difficult light conditions. The large keyboard and ergonomic programmable keys allow an efficient and productive communication.

Upgradeable software enables the possibility of new features. By altering the firmware-software, other digital and analog operating modes can be enabled, without the need for purchasing a new radio device.

Thanks to digital signal transmission, the MD785/MD785G allows you to carry out different types of voice communication, including individual calls, group calls and simultaneous communication with all subscribers.

The MD785/MD785G offers you data services, such as sending text and group messages.

The MD785G supports GPS location determination and allows GPS location data to be sent as a text message. In addition, the distance and position of other GPS-enabled radios in the DMR radio system can be detected.

The MD785/MD785G allows automatic cell re-selection (roaming) at all sites in multi-site systems.

With the MD785/MD785G, you can utilize various services, such as radio check, remote monitor and call alert.

For a clear audio output, the MD785/MD785G features a powerful 5-watt loudspeaker.

Yaesu promotional offer of July (for further details contact us)